I'm not doing any running this week due to special activities with my grandchildren. I walked about 2 miles today but was on my feet for about 6 hours. Needless to say, my legs were pretty tired by the end of the day. Fortunately, it was a relatively cool day (low 70s (F)), and I didn't suffer from heat. I will be walking a couple of miles each day during the rest of the week.
Posted by Allen Leigh 3 comments:

A longer run/walk of 70 minutes

My wakeup heart rate was 58. The temperature during my run was in the low 60s (F), the sky was cloudy, and a light wind of about 15 mph. Another great day for running. I went south from 100th South. The standing water in the tunnel under 106th South was only an inch deep, and I waded through it (about 10 feet of distance) and continued south for not quite a mile (going past the East Pavilion). I did 3.8 miles in the 70 minutes. The run/walk was uneventful, so this will be a short post.
Posted by Allen Leigh No comments:

The temperature during my run/walk was in the low 50s (F). Lots of sunshine and a 8-10 mph south wind. Another great day for running. I went north from 100th South, through the Sandy city golf course and up Riverside Drive to 50 yards before the light at 7th West and 90th South. I felt fine during the runs and took no rest breaks. I completed 3.2 miles during the hour. I wore my running shorts and a T-shirt and enjoyed the warm day, although I hope we get lots of snow in the mountains this winter. I wore my wind breaker during the first half-hour, and then after my body was warmed up, I took the jacket off and tied it around my waist.

Running and walking for 60 seconds is working fine for me. In a couple of weeks, if I still feel fine, I'll add another 5 seconds to the times.

I saw lots of geese in the field that had them on Saturday.  The field also had 2 horses, and the geese and horses seemed to not be bothered by the other animals in the field.

I didn't measure my wakeup heart rate this morning, but I felt pretty good, thanks to several nights of good sleep. I added 5 seconds to both my running and walking (60 seconds each phase) and covered 3.33 miles in 65 minutes. I went north from 100th South. When I got to the golf course, instead of following the yellow line through the golf course to the temporary end of the trail at Riverside Drive, I went north past the west side of the golf pro shop on a straight line to 90th South. Then I followed the path in a loop through the golf course and back to the pro shop and a mile back to my car. The temperature was in the high 40s (F) when I started and in the low 50s when I finished. The sky was mostly cloudy, and it was a great day for running. 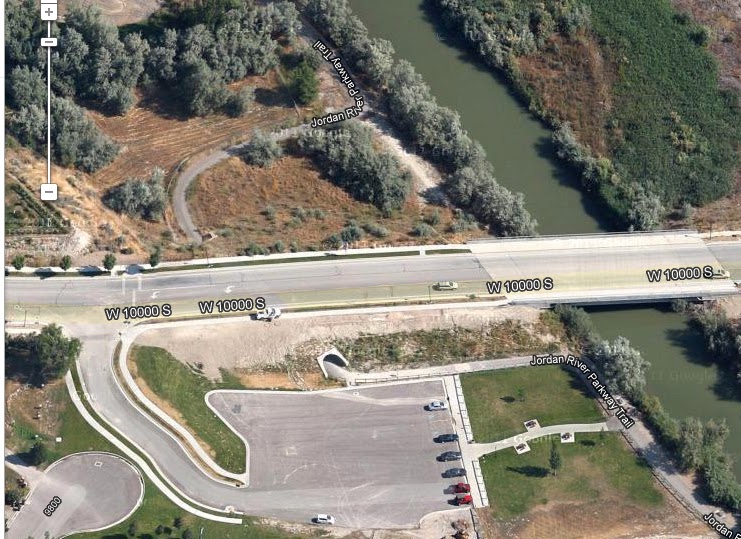 Google maps gives a good view of the path I followed this morning. Find the intersection of 100th South in South Jordan City and the Jordan River and zoom in until you see the Parkway trail going through a tunnel under 100th South (I do my stretches in that tunnel at the end of my runs). The picture to the right shows the tunnel. The small white car that is at the bottom-center of the picture is my car (The picture was taken a few years ago). Since my car is in the picture, I thought I might be seen on the path. I searched the path from the new bridge across 11400 South, which was just being built, to the temporary end of the path about 3/4 mile north of the parking lot, but I didn't see me. I did see several walkers or runners, but I wasn't one of them because their shorts were the wrong color. 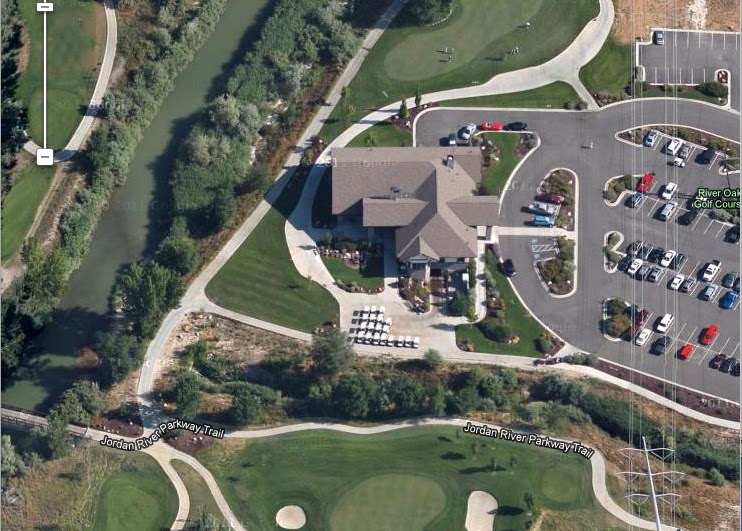 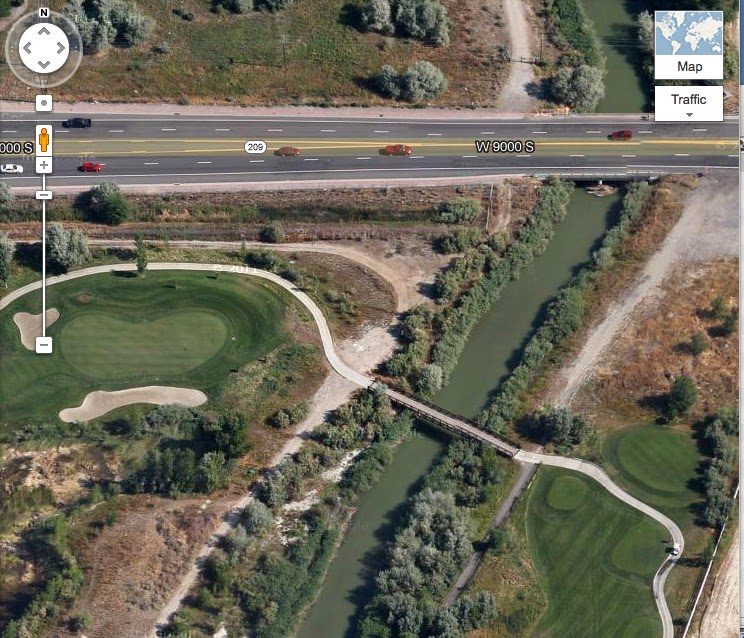 I approached 90th South on an asphalt path that is shown in the picture to the right. I crossed a bridge back across the river and followed the path as it wound through the golf course back to the pro shop, crossing the river on a narrow bridge that isn't shown in any of the pictures. 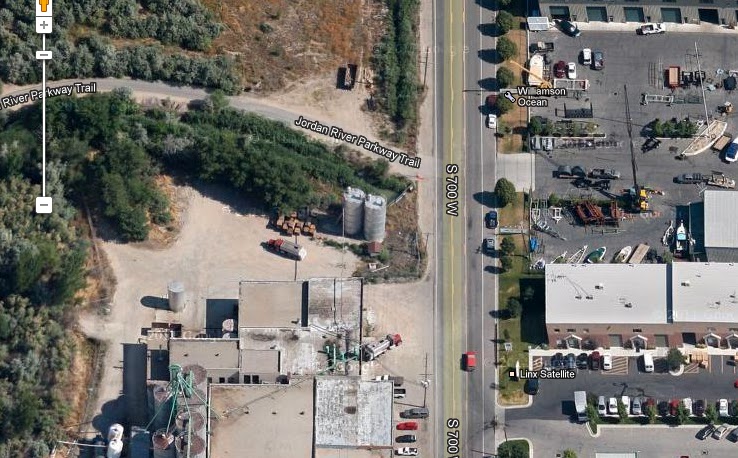 As a side note, the only safe way to cross 90th South is to take the Parkway path past the pro shop to Riverside Drive and follow that street to the intersection of 700 West and 90th South. About 3/4 mile north of 90th South on 700 West, an entrance to the Parkway trail is marked, and the trail goes north past Salt Lake City to Davis County. So far, I've gone on the trail to 3900 South, which is about 5 miles south of Salt Lake City.

I've noticed that Canadian geese like fields instead of the river. Ducks are always in the river, and the geese are always in fields. Today, I saw a huge flock of geese in a field. I guess  geese forage in the field for food, while ducks forage in the river for food, although with winter coming, the ducks are spending more time on the asphalt path and nearby dirt looking for food. The following picture of geese in a field is from the web. That picture shows approximately 30 geese. The flock I saw had 100-200 geese. 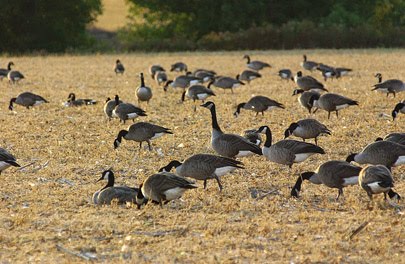 My wakeup heart was 56, and I looked forward to a great run. However, while waiting for the temperature to get above freezing, I ate a heavy breakfast. I knew it would take a while for my stomach to adjust to the breakfast, so I planned on going out in early afternoon. I felt fine when I left for my run, but as soon as I started running, my stomach acted like it had the flu or something. After about 20 feet, I decreased my pace to a fast walk. I felt fine while walking, but I couldn't run very far. So, I walked most of the first mile. I could tell, though, that my spurts of running were getting longer. After about a mile and a half, my stomach felt fine, and I resumed my normal alternating of 55 seconds running and 55 seconds walking. The temperature during my run was in the low 40s (F), and it was a beautiful, sunny day. The snow on the ground is melting, and in a couple of days it will be gone. Today was another lesson that my breakfasts must be lighter and more easily digested. I thought 4 hours would be enough time between breakfast and my run, but it wasn't.
Posted by Allen Leigh No comments:

I went out running about 1 pm. The shade temperature during my runs and walks was 35 (F), with no wind. I ran south from the 100th South trail head. The tunnel under 10600 South was flooded from recent rain and melting snow, so I went back to the trail head and went north another 0.6 miles. I felt pretty good during the run and didn't take any rest breaks. My run lasted about an hour.

We have about 6 inches of snow of the ground. Winter has finally come to Utah. I did a short run of 2 miles in the late afternoon. I had considered going to a local recreation center and using an indoor track, but I decided that our daytime temperature of slightly above freezing was enough to melt the snow on the Parkway path, and I ran on that path. Except for a few shady spots, the path was free of snow, but it was wet from melting snow. Because I ran in late afternoon, there was a danger of the water freezing, making the path slick, and I reduced my run to be sure I would be finished before the sun set behind the Oquirrh Mountains. In addition, I hadn't eaten much since last night, and my body wasn't developing much heat -- I barely had enough energy to do the short run. I felt the cold more than I had expected, likely due to my lack of food during the day and to this being my first experience this winter with cold (it takes a few runs for my body to adapt to the colder temperatures). The shade temperature during my run was slightly above freezing, and I wore my usual three layers. There was no wind during my run.
Posted by Allen Leigh No comments:

My wakeup heart rate was 57, so I went running. However, I was still tired and took several short rest breaks on the way back. Yesterday, I spent a good part of the day doing yard work, including mowing my lawns, and that caused my body to be tired today. Not only was there grass to be cut but lots of leaves to  be sucked up by the mower. The leaves meant that I had to empty the bag more often, and a full bag weighed more. I have to do the Fall rototilling of my vegetable gardens tomorrow and/or Friday, so I'll probably be tired on Saturday.

Today was another great Fall day with temperatures in the mod 60s during my run. However, it will start to cool tomorrow and Saturday with snow likely in the higher elevations.
Posted by Allen Leigh 4 comments:

I ran for 60 minutes today (3.2 miles), but I was tired during most of the run. I felt fine during the first mile, but became tired as the run/walk progressed. My wakeup heart rate was 57, indicating my attempts to get more sleep are paying off. However, my body hasn't responded to the sleep as fast as my heart rate. It was a beautiful day with temperature in the mid 60s during my run. I wore a long sleeved t-shirt but would have been better off with a short sleeved shirt.
Posted by Allen Leigh No comments:

I just learned that my training site has been selected as one of the 24 World Class Training and Injury sites listed by KwikMed.
Posted by Allen Leigh No comments: