Ended the week with a 2.5 mile run

I started running at 6:40 pm MDT, and there was a lot of shade on the path. On my way back, the path was almost all shade, and the shade felt nice. The temperature during my run was in the high 70s (F).

I didn't see many other runners on the path, but I did see several walkers and a lot of cyclists. On my way to the turn-around point, I passed two men walking. On my way back, I passed those men again, and one of them asked my age. I replied "77", almost "78". He said he hopes, when he is my age, that he will still be running. He said he runs half-marathons, and he asked me if I ran marathons -- he said I looked like a marathoner. I said I used to run marathons, but I'm a lot slower now. When we were talking about my age, I replied that I had 22 more years to reach my goal of running until I'm 100.

After I got home, my wife and I sat on our patio for a while and enjoyed the coolness and peace of the evening. There are a lot of crickets chirping in the bushes. I can hear them now as I type this. When I was a boy, I learned how to get the temperature from the number of chirps, but I don't remember how it went. So, while I was typing this, I went to the fountain of all knowledge and found the following formula.

To convert cricket chirps to degrees Fahrenheit, count number of chirps in 14 seconds then add 40 to get temperature.

The following picture is from the web. 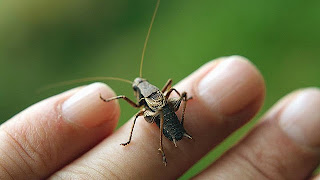 It was late afternoon when I went running, and the shade temperature was 80 (F) when I left. Because of the lateness of the day, there was more shade on the path. The shade felt nice as I ran or walked through it. Most of the path is in direct sun, and it was still hot even though it was in late afternoon. The high today was about 90. I didn't see many people on the path, mostly cyclists. I did see two older men walking. They asked me if there were any convenience stores nearby. I told them "no" and that they should go back to Redwood Road to find the stores. I don't know if they have a car parked somewhere, but they may be doing a long walk....
Posted by Allen Leigh No comments:

The temperature was in the high 70s (F) during my run. We're having several days of cloudy weather and showers, and today's temperature may be the "normal" for this week. I didn't run much during the past 2 weeks, and I'm giving myself 1 to 2 weeks to get back to my "normal" runs of 3 miles. I ran 2 miles today in 43 minutes.

The Jordan River is low, and there are bushes growing out of the water in the middle of the river. Several ducks were swimming among the bushes when I went past. When I returned, the ducks were on a sand bar in the middle of the river enjoying the sun. At  the point where I saw the ducks, the river is about 100 feet wide and probably only a foot or so deep. Normally, the river is about 3 feet deep. 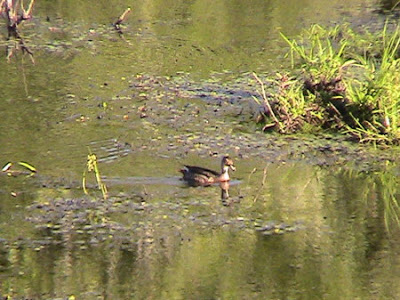 Spent the week at Education Week at BYU

This week was spent at Brigham Young University in Provo attending classes at the annual Education Week. All of the classes my wife, one grand daughter, and I took were religious classes, but there were other classes that covered food and investments as well as religious topics. We drove an hour each way to BYU, and we didn't get home each night until late. I only got about 5 hours sleep each night, and I walked around 7 miles during the week.
Posted by Allen Leigh No comments:

Aborted my run after 2 miles

On Monday, I started running with the hope of doing 3+ miles, but I was tired and aborted after 2 miles. Last week was stressful, and I guess I'm not fully recovered yet. During the rest of the week, I didn't run, but I did take walks with my grandchildren who were visiting for the week, and I probably walked about 2 miles total during the week.These were slow walks that covered some distance but at a slow LSD.
Posted by Allen Leigh 1 comment:

A week of hiking

I didn't do any running this week, but I did a lot of hiking. My wife and I joined our daughter and her family and drove on Monday to Southern Utah to see Shakespeare plays and visit national parks. I hiked about 10 miles during the week. We met our daughter at Cove Fort, and we toured the pioneer fort.

On Tuesday, we visited several places in Cedar City where I had lived and played as a child. We planned to go to "boys cave" next to the red hill, but the access to the hill containing the cave is now private property, and I decided to not try and get permission to pass through their back yard. We thus aborted our hike to "boys cave". Boy's cave is not really a cave. It is just a wind-swept indention in the side of a rock. To us boys, though, it was a real cave and was large enough to allow several boys to sit in the cave  and look to the red hill east of us.

On Wednesday, we hiked Kolob Canyon, and I covered 4 of the 5 miles of that hike. The trail, if I may call it that, followed a creek and went up and down and up and down and... I can handle hikes on relatively level ground, but I'm not in condition for hiking up and down hills and climbing over rocks. The hardest part was at the end of the hike when I had to go about 100 feet up a cliff by climbing a million stairs. At the beginning of the climb, I could go about 10 steps before I took a rest. In the middle, I was going about 5 steps before a rest, and at the end I was going three steps before a rest. The afternoon was hot, and I had used up all my water and was thirsty. I was glad to finish that hike. During the hike, I wished I had brought my walking stick with me. I've never had good balance. As I get older, my balance is worse, and I have a hard time climbing over rocks and jumping from rock to rock to cross creeks. Having the walking stick to provide a third "leg" would have helped a lot. During my 11-years as Scoutmaster in Massachusetts, I found that the walking stick was helpful in giving me better balance as I hiked rough trails. After I finished the hike, I sat in my car and waited for the rest of our group. After they arrived, I got out of the car and was immediately attacked by cramps in my left leg. Usually, cramps only last a few seconds, but this cramp didn't go away. I couldn't move my leg, so I massaged the leg. The cramp shifted to the other leg but didn't decrease in intensity. Finally, after about 5 minutes the cramp dissipated, and I was able to drive back to our home for the week in Cedar City

On Thursday, we drove an hour to Zion National Park and completed a 2-mile hike along the Virgin River (Riverside Trail) to the beginning of the Narrows. The trail was mostly flat and the path was paved and easy to walk. The rest of the afternoon was spent lollygagging around the Lodge. We happened to see Gary, my brother-in-law, and part of his family who had just completed a 17-mile hike through the Narrows. The following picture was taken from the web (click picture for a larger image).

On Friday we returned to Zion and hiked a dirt, rocky trail to a swimming place in Zion. It was only a mile each way, but I never made it. I did fine during the first half-mile, because the ground was relatively level and there weren't a lot of rocks in the path. But, during the second half-mile the trail went up-hill more, and I realized I was getting tired, and I turned back. My wife said it was good I turned back, because there was a 10-foot climb up several rocks, and she said I never would have made it. I didn't bring my fanny pack that holds two bottles of water, so I was carrying one bottle in my hand. On the way back, I had to climb over a big rock to get from the creek to the bank, and I tossed my water bottle into the sand on the bank so I could use both hands to climb the rock. When the bottle hit the sand, the top came off, and all of my water and ice cubes spilled onto the sand. I still had about 1/3 mile left, and I had no water. The temperature was in the low 90s (F), and I got pretty thirsty before I finished the hike. After I reached my car, I drove to the visitor's center to get water, but the parking lots were full, and I returned with no water. However, when I returned I found that my wife was in my daughter's car -- she had turned back, too. She shared her water with me.

After leaving Zion, we stopped at Kolob Reservoir, and we saw a California Condor flying above the water. There are only about 150 of these birds in existence. We later looked at the photo my son-in-law took of the bird, and we could see the tag put on the bird to track its flights. The tag was #75. The condors have a wing-span averaging 9 feet. The following pictures of a California Condor (#4) and Kolob Reservoir were taken from the web (click the pictures for a larger views).

This morning, on our way back to the Salt Lake valley, we stopped at Bryce National Park, and my daughter's family and I hiked a short way into the canyon and back. I went about 1/4 mile each way. I could have gone farther, but the descent was all switchbacks, and each step downhill was 3-5 steps (in effort) uphill. During that descent, I changed elevation by about 200 feet.  The elevation at the top is about 9000 feet, and hiking at that elevation is more difficult than hiking at lower elevations.

The following pictures of Kolob Canyon and Bryce were taken from the web. The picture of Bryce shows the switchbacks I hiked (click the pictures for larger views). 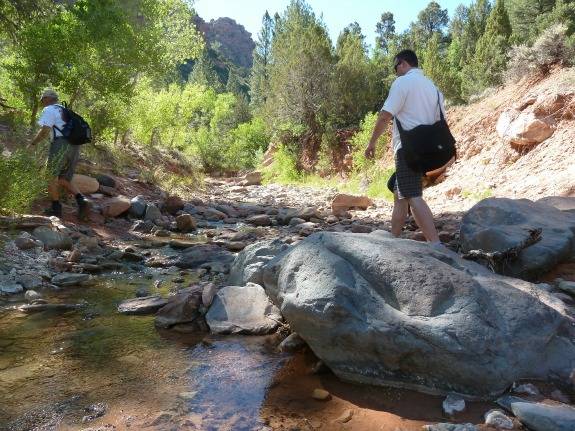 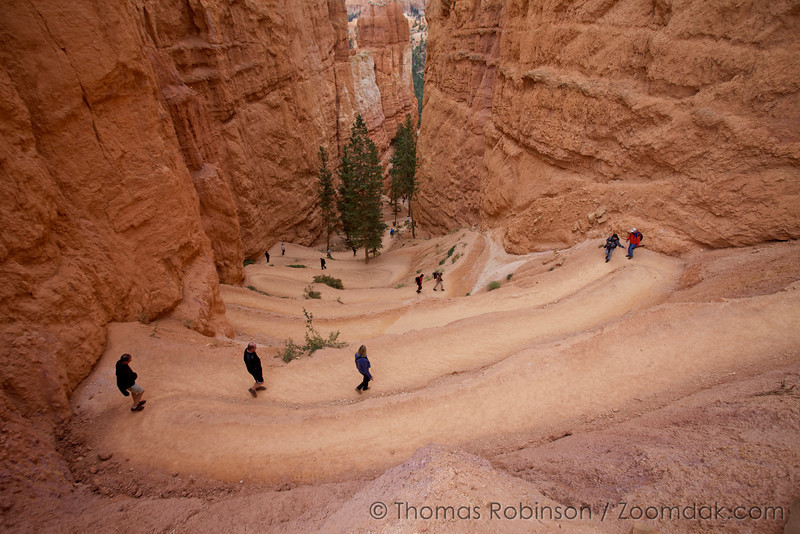