Ran 2.5 miles against a headwind that died out

I went running and walking in the late afternoon and finished about half an hour or so before it got dark. I did more walking than I have in past runs and probably ran about 1/3 of the distance and 2/3 walking. When I was younger, if I didn't run for a week, it would take me about a week to return to my previous condition. Now it takes me two or three weeks. I used to run 5 days per week. Now, my goal is to run three days per week, but some weeks I only get out once or twice. I call myself a runner, but I've really become a jogger. I run and walk pretty slow. But, that's OK. At least I'm out and moving about.

The first half of my run was against a 10-15 mph headwind, and I looked forward to having that as a tail wind on the way back. However, the wind stopped, and my return was with no wind. I've been thinking that I should go north instead of south for the first half of my workouts....

My wife and I drove to the Jordan River Parkway in the late afternoon and went south from 100th South to 106th South and back. The temperature was in the high 30s (F) and there was only a slight breeze blowing. We had planned on going 2.5 miles, but I was tired, and we turned back after reaching the tunnel under 106th South. The trail was mostly devoid of others, and we only saw four walkers. One person was pushing a walker; that is the first time in 41 years of running that I've seen a person pushing a walker; good for him! The sky was cloudy with spots of sun. The following picture was taken from the web. 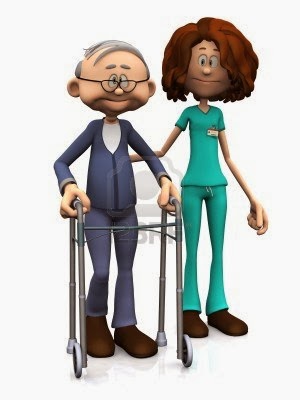 My wife and I went out in the late afternoon. The sun and clouds were in the sky when we left, but the sun went down while we were out. We had no problems seeing the path, though, because it was the dusk that occurs after the sun goes down and before it gets dark.  I too a one-minute rest at the turn-around bench but no other rest stops. I felt pretty good when we turned around, and I was tempted to go a bit further. However, when I reached my car, I was tired and glad I hadn't gone further. I didn't check my thermometer when I got back, but the temperature was probably in the high 30s (F).
at 11/20/2014 No comments:

It was cold and likely to rain, so we went to the rec hall. My wife walked 2.5 miles, and I ran a mile and then rode the bike for 4 miles. My foot slipped off the pedal and scraped my leg. As I get older, my skin is more susceptible to injury, and there were three places were the skin was scraped. One area was about the size of a quarter; the other were smaller. There was only a little blood and some minor pain.
at 11/17/2014 No comments:

For almost two decades I hung out on a particular running forum and made a lot of new friends. We shared our experiences and learned from each other. That forum was truly a “home away from home”. However, the powers that controlled that forum decided to abandon the interaction between visitors and to make the site a traditional running site, albeit an excellent site. So, to continue the interaction that has proven valuable and interesting to me, I’ve created a new forum. Enjoy!

A good way to end the week

I left to go running about 1 pm. I drove to the Jordan River Parkway and went south again. I wore long pants, because it was cold last night and I expected to go out in the morning. I should have changed to my running shorts when I realized I would be running later in the day, but I kept my long pants on. After I warmed up and started to sweat, I took my jacket off, and that helped. The temperature was in the mid 60s (F).

I ran 2.5 miles again. I started with a run/walk ratio of 30 seconds/30 seconds, but changed to a ratio of 20 seconds/40 seconds to give myself a little more rest between running phases. There were quite a few folks on the trail. Three guys flew by me on their bikes, and the lead one yelled back at me "You motivate me, you motivate me, you motivate me". I replied, "But I'm not as fast as you", although he likely didn't hear me because he was going much faster than I was. I took two rest stops of about a minute each on the way down and three stops on the way back. On my last stop, I heard a man talking loud. He was off the trail in some trees, and I couldn't tell what he was saying. After I completed my run, I was sitting in my car eating a protein bar, and two police cars came into the parking lot. One policeman came to my car and asked if I had heard somebody yelling. I told him about the loud voice I heard from the trees. He asked me if I was the one who had called the police, and I said, "no". He walked down to the trail and talked with a couple of people who were walking.

The following picture, taken from the web, shows a police car from South Jordan, Utah. 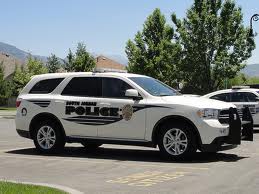 Ran a mile and rested during the rest of the day

Yesterday I had a wisdom tooth pulled. I felt pretty good today as I ran/walked, but I only went a mile so I could rest more during the day. We're having a lot of sunshine during this week, and it is a beautiful time to be outside. My wife was with me, and she only walked the mile.
at 11/05/2014 No comments:

Judy wasn't feeling well, so I went by myself to the Jordan River Parkway and ran south from 100th South, following the route I usually use when going south. I took no rest stops on the way down and only two stops on the way back. I felt a bit stronger than I've felt in the past couple of weeks. I go slow, but I'm still huffing and puffing when I finish. Today was cloudy and cool, but the sky started to clear in the afternoon and there was sunshine during the afternoon.
at 11/03/2014 No comments:

My wife wasn't feeling well this morning, so I went running by myself. It was a nice morning for running, temperature being in the mid 60s (F). However, in the afternoon it clouded over, and forecasts were for rain.

I felt fine during the first half of my run and didn't take any rest stops. On the way back, though, I took three rest stops for about a minute each. I felt stronger during my run, and I think I'm slowly getting used to this distance.
at 11/01/2014 No comments: