My wife and I went to the South Jordan East pavilion and went south. She only walked 1.5 miles, and I ran about 1.7 miles.  I had been stopping just short of the narrow bridge across the river at 114 South. Today I ran to the far end of the bridge. We were busy with family activities all day, so we went out in the evening, around 7 pm. The temperature was in the mid 70s (F), and it was a nice time for running. Quite a few people were on the path. The Jordan River is still low. If we get a lot of snow this winter, the river should be higher next year.
Posted by Allen Leigh No comments:

Another run/walk in morning shade

My wife and I left home about 9:30, and we enjoyed the extra shade from being out in the morning. Leaving even earlier would give us even more shade. I ran/walked 1.5 miles and my wife walked 2 miles. We were back home an hour after we left.
Posted by Allen Leigh No comments:

A beautiful day and another 1.5 miles

My wife and I were on the Parkway path at 10 am. Even though it was late morning, there was quite a lot of shade (we went north from 100th South). I didn't have my two-phase counter with me, so I estimated my running and walking phases; pretty close to 35 seconds each phase. After a mile, my quads started to feel the effects of running, and I increased my walking to give my legs a bit more rest before I ran. That extra walking did help, and I completed my workout with only one rest-stop for a minute.
Posted by Allen Leigh No comments:

My wife and I left home about 9:30 this morning. We drove to the East Pavilion in South Jordan City and went north. The temperature during our workout was in the mid 80s (F), and it was humid. There were quite a few runners, walkers, skaters, cyclists, etc. on the path. I felt fine during the first mile, but then my legs started feeling tired, and I took several rest stops. I used a run:walk ratio of 35 seconds:35 seconds.

On the way back, we saw about 50 or so Canadian geese in the Jordan River. Usually, we see ducks in the river and geese in fields. The geese were under the bridge over 104th South where it is shady. Maybe the geese were seeking shade to avoid the heat of the day.

On the way home, I was thinking about my history of running. Five miles used to be a rest run; now it is a long run. 1.5 miles used to be my warmup distance; now it is my total distance. Such is life and getting old. My next birthday will be this fall, so I'm on the downhill side of becoming 79 years of age.

The following picture was taken from the web and shows a flock of geese in a river, although the geese I saw were under a bridge instead of next to the bridge. 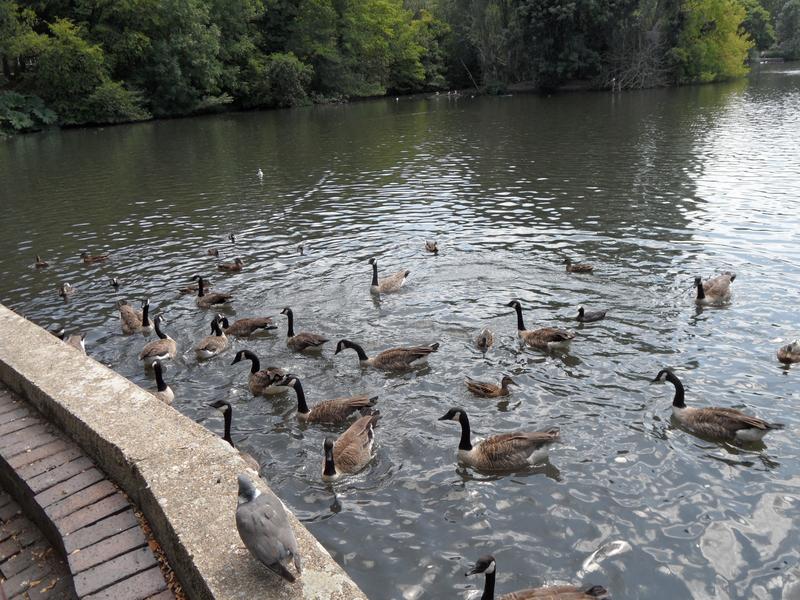 My wife and I had an appointment in the late afternoon, and I only had time to run about 1/4 mile. I dropped my wife off at the trail head of the Jordan River Parkway so she could do her 2 miles of walking, and I drove away to run errands. When I returned to the Parkway, my wife wasn't waiting for me, so I started running and walking until I met her, and then I walked back with her to the parking log. Hopefully, on Saturday I'll do my normal run/walk. We should have left home earlier, but I didn't manage my time very well today.
Posted by Allen Leigh No comments:

I went running in the late evening, not too long before it got dark. I ran my usual route on the Jordan River Parkway, south from 100th South. I didn't have my two-phase counter, so I estimated each phase. I began running and walking for about 30 seconds, but I could tell my legs were tired, so I walked for about 60 seconds and ran for about 30 seconds. My legs felt fine doing it that way.

Quite a few people were on the path, even though it was close to getting dark. The path isn't hard to follow in the dark, because the asphalt is a lighter shade of gray than the surrounding vegetation.  Also, there are lights from near-by buildings that help to lighten the night.

I didn't run last Saturday, because on Friday we played miniature golf with several grandchildren. I didn't do a lot of distance (maybe a quarter mile), but I was on my feet for two hours. Also, before we went golfing, we walked to the nearby canal and back to look at the ducks, a distance of about 0.6 miles. Saturday was thus a rest day.
Posted by Allen Leigh No comments:

In the mid afternoon, my wife and I drove to the South Jordan East Pavilion and went south.  I did 1.5 miles running and walking and she did 2 miles walking. I'm still using a run:walk ratio of 30 seconds:30 seconds. I didn't look at a thermometer, but the temperature seemed higher than we've had the past few days. Also, there was a north wind of 5-10 mph, and that headwind on the way back helped cool me but made my running harder.
Posted by Allen Leigh No comments:

It was 8:30 pm when I started south from the trailhead at 100th South. The sun was set but it was still light. After going 1.5 miles, I returned to my car  a few minutes before it got dark. I didn't check the temperature, but I think it was in the 70s (F). Quite a few people were on the trail, even though it was late in the evening.
Posted by Allen Leigh No comments:

We've had two grandchildren with us for the past day, and this morning we walked about 0.6 miles to the nearby canal to see the ducks and the new ducklings. We fed the ducks some bread, but they weren't hungry and ignored most of the bread.

In the early evening, my wife and I went to the Jordan River Parkway and went south. I did 1.5 miles and she walked 2 miles. The sun was still above the Oquirrh mountains, but there was a lot of shade on the path. Quite a few people were out in the early evening getting their exercise.
Posted by Allen Leigh No comments: