My wife and I just returned from doing another 2 miles, using the same route we used on Monday. The sky was completely overcast, and there were forecasts of thundershowers. We took the north route from 100th South again, because there are more trees than there are on the south route. If lightning should strike, we wanted tall trees to attract the lightning.

I didn't see many runners on the trail, but I saw quite a few walkers and cyclists. My wife walked slower, and I was able to keep up with her on the way back. She was ahead of me, though, on the way out, because she went from our car straight to the trail instead of walking down to a different point on the trail that I normally start from.

I did get only 5 hours sleep last night. We were up until 2:30 am finishing a 500-piece puzzle. That was a hard puzzle and took quite a few hours to complete. My wife did most of the work, but I helped during the last two or so hours. My wife has been putting a lot of time in on our yard, and doing the puzzle was a nice change for her.


Posted by Allen Leigh No comments:

My wife and I were out about 9 am and went north from 100th South on the Parkway. I did fine for about 3/4 mile, and then I started to run out of energy. My legs felt fine, but my body was really tired. In fact, I walked most of the mile back to our car. The temperature during our run was in the high 70s (F) and low 80s, warmer than last Saturday but still better than the 90s during mid-day. I only had 6 hours sleep last night, better than the 5-5.5 hours I've been getting but not as good as the 7 hours I need. I'm hoping to take a nap later today.
Posted by Allen Leigh No comments:

The Early Bird Gets a Cooler Run

I started my run/walk about 8 am. The temperature when I left was in the high 60s, and when I returned it was only 4 degrees higher. An awfully lot of people were out on the path, and it was nice to have  cool run for a change. I ran 1.9 miles for the third time this week. My wife stayed home because our daughter and her family were visiting. I've changed to a run/walk ratio of 40 seconds each.
Posted by Allen Leigh No comments:

My wife and I left rather late in the evening, and I ran/walked 1.9 miles going south from 100th South. There were a lot of people on the path, mostly cyclists. We finished about 15 minutes before it got dark. By running in the evening, we avoided the hot part of the day, when the shade temperature was in the mid 90s (F). I'll do 1.9 miles again on Saturday, and then do 2.0 miles next week (if all goes well). I'll be busy Saturday evening and will have to go running in the morning.
Posted by Allen Leigh No comments:

Added a bit for 1.9 miles in the neighborhood

My wife and I left home after dark, and we did 1.9 miles in our neighborhood. She stopped to talk with a friend but soon caught up with me. Before I started running on canal maintenance roads and the Jordan River Parkway, I did all my running on neighborhood streets. I found that by running all streets and cul-de-sacs, I could get about 5 miles. When my distance got bigger than 5 miles, I started running on canal maintenance roads and later on the Parkway. The sidewalks around here are bumpy due to frost heaves and ground settling, but the streets are pretty smooth. My goal is to add 5-10% each week to extend my distance. As my distance gets longer, the amount I add each week gets longer too. Even though daytime temperatures are in the 90s (F), the early morning and evening temperatures are in the 70s, and that helps. 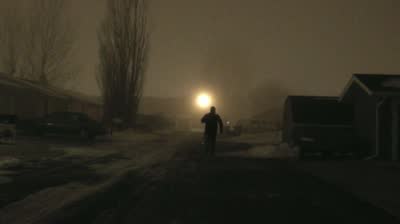 My wife and I went out in the neighborhood, and I did 1.7 miles. I didn't do very well, because we had supper about an hour before we went out, and I don't run very well while digesting food. I need 3-4 hours between eating and running. The temperature during our workout was in the low to mid 80s (F). We ran in our neighborhood instead of going to the Jordan River Parkway because of the lateness of our going out. It was dark before I finished. Fortunately, nobody chased us while we were out. 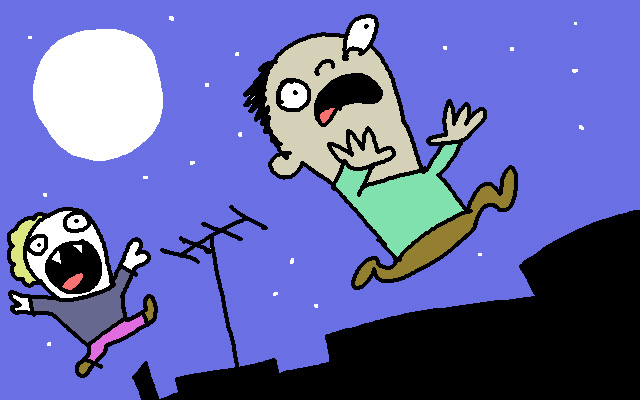 My wife and I did another 1.7 miles this evening. The temperature had been 95 (F) during the afternoon, but when we went out, the temperature was down to 81.  We went late in the evening, just minutes before the sun set below the Oquirrh mountains. We could still see the path when we finished, but about 15 minutes later, it was dark. I didn't carry water with me, but we had good drinks from the fountain at the parking lot before and after our workout.

There were a lot of birds and animals out during our run. I frequently see swarms of starlings flying to trees during dusk, but I didn't see any during my workouts Monday or this evening. I did see a lot of birds flying around, but they weren't in swarms. Actually, I couldn't tell if they were birds or bats. What ever they were, I hope they ate a lot of insects, because there are a lot of small gnats flying into my face -- no bites, just the bother of the gnats flying into my face.

The following picture of bats flying in the trees was taken from the web. 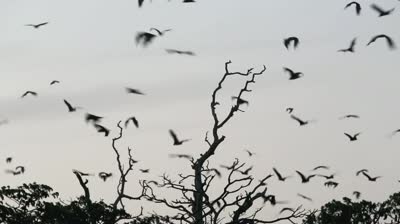 I went running in the late evening and ran 1.7 miles. I waited until late evening, because today was awfully hot and I hoped late evening would be cooler. It was. The temperature during my run was in the high 80s (F). The sky was cloudy, and  I finished my run/walk a few minutes before darkness set in (it was dark when I arrived back home). As to be expected, there weren't many people on the path. I carried two one-ounce bottles of water. In addition, I had a good drink before I left home, and another drink at the trail head, and I had a good drink when I finished my run. My Fuel Belt holds six bottles, and as my run/walk gets longer, I'll carry more water.
Posted by Allen Leigh No comments:

I really messed up my schedule today. I went running the hottest part of the day (mid-day). I drank extra water before I left home, and I took a good drink at the trail head before started south from 100th South. Because of the heat (temperature was about 95 (F), I stopped when ever I passed a bench and rested for a minute or so. I also walked more than I normally would. I had mowed my lawns earlier in the day, and my body was probably tired from doing that. During hot weather like today, I run to survive. Spring and Fall are times to improve performance.

The first sign of heat exhaustion that I usually get is a headache. I didn't have that symptom today. Another sign of heat exhaustion that can lead to heat stroke is a lack of sweating. Sweating is the way our bodies regulate temperature, and if we stop sweating our internal temperature starts to climb. I wasn't aware I was sweating less during my run, but at the end of the run I got a good drink of water, and sweat started pouring down my face.

Because of the shortness of my run, I didn't carry water, but I should carry water when ever the temperature goes above 90. I need about 1 cup of water per mile, so I should have carried two bottles of water (1 cup each) in my Fuel Belt. Hopefully, I'll get used to the heat (to a degree at least), but in the meantime it would be good for me to run earlier in the morning. 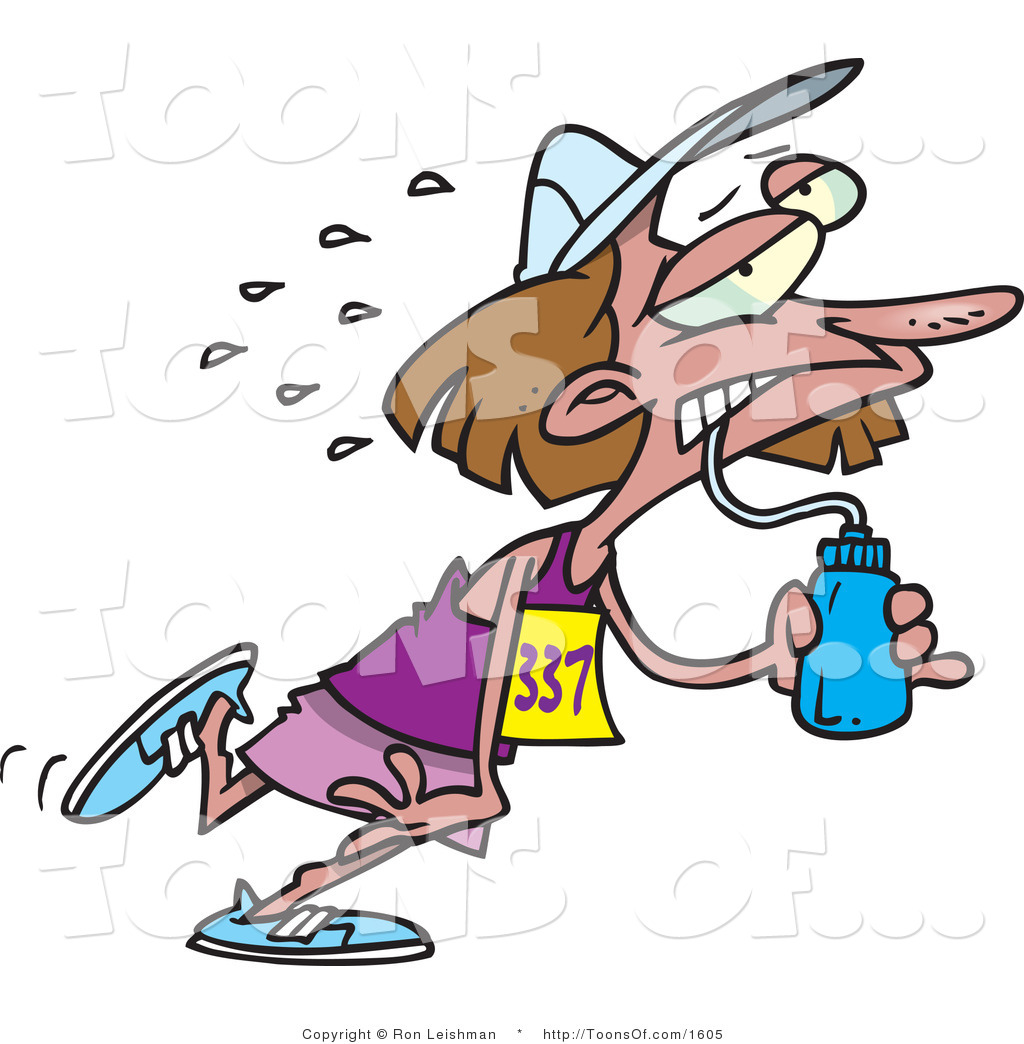 My wife and I drove to the trail head at 100th South and went north on the Jordan River trail. I did 1.65 miles again and she walked 2 miles. I felt pretty good. It was mid-day when we started our workouts, so we worked out in the hottest part of the day.
Posted by Allen Leigh 4 comments: