My wife and I finally did some running and walking today. We just got back from that workout. With a headwind of about 5-7 mph and a cloudy sky, it was a great day for running. The temperature was in the mid 70s (F), and the headwind  kept my body relatively cool. However, when I reached the one-mile marker and turned around, the wind had died down, and I began to heat up. I decided it wasn't quite so nice, after all. My body felt fine, but my legs got a bit tired. I felt, however, much better than I did the last time I ran 2 miles. The big test will be on Monday. It's common for my first run to be good after I've been off for a while, but the second or third run usually isn't so good.

I found three golf balls along the path. One ball belonged to the golf course, and I threw it back onto the nearby green (golf course balls have a particular marking that privately owned balls don't have). The other two balls were privately owned, and I kept them, washing the dirt from them in the water fountain when I returned to the parking lot. I don't know why I'm collecting the balls. Originally, I thought my grandson would be interested in selling the balls, but he didn't show any interest in them. I continued collecting them and am still doing it, although I'm not putting in much effort to getting them. If I see one as I run, I'll pick it up. Other wise, I leave the balls that are away from the path for others to get.

I saw a few quail along the path. These were individual birds and not in a flock with their mother. I couldn't tell if they were a parent of a spring-flock or a member of the flock. The babies in the spring are now almost fully grown and are as big as their parents.

Review of the past 10 days

Last week, my wife and I were in Provo attending a non-credit Education Week at Brigham Young University. We left home about 7 am and returned around 10:30 pm. I did no running during the week, but I did walk about 3 miles. It was a stressful week, but the classes were nice. My favorite classes were on archeology and the life of Christ. Archeologists are learning about the architecture of the Temple Block in Jerusalem and the lives of typical Jewish people in Galilee and Judah that likely applies to Christ. For example, the Jewish temple was built on Mt. Moriah, and the wall around the temple was built with a taper to compensate for the decline of the hill, giving level ground around the temple. This area was known as the Temple Mount. Many of the activities of Christ, such as the cleansing of the temple were in the Temple Mount not in the Temple itself. Money changers were at the Temple Mount to exchange the coins used by common folk into the special gold coins used in the Temple Mount. The Temple priests, who were wealthy, were involved with the money changers, and Christ was upset with them, because they charged extra for the exchange of coins and used that money to pay for their expensive homes in the "upper" part of Jerusalem. Another class that I enjoyed was on the writing of personal histories, making the stories seem real-life to the readers so they want to keep reading, so the readers react as if they were there. I'm currently writing my personal history, and I need to review what I've written and see if I can fine-tune the stories.

Two of our grandchildren attended Education Week with us.

This week has been mostly a no-running week. My daughter and her family are in Germany and France for a year doing research for two books, and my wife and I spent significant time at her house doing a few things that weren't done to make the house ready for new renters who will move in at the end of this month. We didn't do any running, but we walked around the block (0.67 mile) on Tuesday. I'm hoping to go running on Saturday (tomorrow).

We've had rain almost every day with lightning strikes. More of that forecast for tomorrow. Not great weather for running. Life is stressful sometimes, and one does whatever is necessary. One day at a time.

The following picture was taken from the web and shows the type of environment I was in last week. 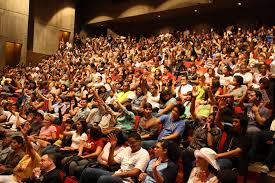 My wife and I were pretty tired yesterday when evening came, and we decided not to go to the Jordan River. Instead, we did a short walk around our neighborhood. Today, I walked (about 1.2 miles round trip) to an early morning church meeting. It was nice walking to the meeting but was hot walking home.
Posted by Allen Leigh No comments:

Second run this week for another 2 miles

My wife and I did 2 miles, going south from the 100th South trail head. I felt stronger than I have in the past few runs, thanks to my getting a bit more sleep. I only took one rest stop each way. The temperature during our run/walk was in the mid 70s (F).
Posted by Allen Leigh No comments:

My wife and I went to the South Jordan East Pavilion and went 2 miles using the same route I used on Saturday of last week. I felt slightly stronger than I did on Saturday, and I got a bit more sleep than I've been getting. We went in the early evening while the sun was still above the Oquirrh Mountains. I didn't check the temperature, but it was probably in the low 80s (F) and had been in the low 90s earlier in the day. The sky was cloudy, and the sun would have been just above the pavilion that is shown in the picture shown below. I like going to the Pavilion, because it has a water fountain, and that water is great to begin and end my run.

The picture shown below was taken from the web, and the camera was located just east of where I usually park my car. 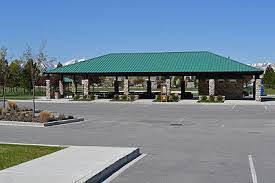 Just finished my run/walk of another 2 miles

I started my run about 10 am and ran 2 miles, going south from the South Jordan East Pavilion (about 108th South). The shade temperature was in the high 70s (F) when I started, but the direct-sun temperature was probably in the high 80s to mid 90s. That route doesn't have much shade, especially that late in the morning. I only had about 5 hours sleep last night, and I was tired during the run and took several rest stops on the way back. My wife, Judy, didn't go with me, because she and a friend will be taking the Salt Lake Valley Home Show tour and will be on her feet for most of the afternoon and evening.

I think I'll continue my 2-mile runs next week. Until I get my sleep under control, I don't want to push for longer distances. I'm getting to bed a bit earlier, but I'm waking up earlier and have problems going back to sleep. Hopefully, I'll get a good nap today.
Posted by Allen Leigh No comments:

My wife and I started our run/walk at 8:01 am and went south from 100th South. Because of our being out early, there was a lot of shade on the path. There were a lot of people, too. I don't remember seeing many other runners, but there were a lot of walkers, cyclists, and two skaters. I felt pretty good during the workout, but I took several short rest breaks. There were a few times that I took an extra walking phase (40 seconds), but for most of the time I alternated running and walking.

My wife was waiting for me when I approached the last 1/8 mile, and we walked to the finish line. While waiting for me, she asked some people if they had seen an old man running. They said that I was sitting on a bench when they went by but was running when they passed me on their way back. I think they were walkers. I'm going pretty slow when walkers pass me.... On Monday (August 4), two women were walking and enjoying visiting with each other. I passed them and felt like I was in a race.
Posted by Allen Leigh 2 comments:

Aborted our run due to thunder and heavy rain

My wife and I left home about 6:30 pm with the intent to do 2 miles again. However, dark storm clouds were coming from the south, and we aborted our run/walk and returned to our car. It started to sprinkle as I got into the car, and a minute later it was raining heavily. I couldn't see very well, so we sat in our car until the rain slowed down enough that we could see the road. There was less thunder than we had expected, but we had very heavy rain for about 15 minutes.  I did about 0.9 miles and my wife did about 1.2 miles. The temperature through all of this was in the low 80s (F), and the wind was blowing quite hard.
Posted by Allen Leigh No comments:

My wife and I just returned from our jaunt along the Jordan River. We started about 8 pm. The sun was down but it was still light, and we finished about 15 or 20 minutes before it got dark. There were quite a few people, mostly cyclists, on the trail. I ran and walked for 40 seconds each for the first 0.75 miles, and then I did two walks for one run (40 seconds each).
Posted by Allen Leigh No comments: