I completed another 1.64 miles

When I first started my walk, I felt tired and wasn't sure how far I would go, but as I walked, I felt pretty good. My body and legs both felt fine. I walked in the early evening, and returned to my car just as it was getting dark. I felt pretty good when I finished walking, taking fewer short rest breaks than last time.

In addition to my walk, I mowed my lawns, which added about 1/4 mile to my distance. However, mowing my lawns gets my heart going faster than does my walking, even though I have a power-driven mower. I should have mowed the lawns a couple of days ago, and the grass was long enough that I had to bag the clippings, and the clippings were heavy as I moved each bag to my two compost bins.

I saw the Persian cat tonight, although he heard a cyclist coming and went into the bushes. A couple of days ago, I saw the black cat. I also saw several quail on the path. No babies yet.

I was pretty tired, but I staggered through another 1.64 miles

I didn't sleep very well last night, because I had a dry cough that resulted from eating a Creamies not long before I went to bed. I didn't have the right homeopathic remedy for dry coughs, and the ones I took didn't help much. During the night I coughed quite hard, and some blood came up with the cough. I was worried that the blood was a result of the blood thinner I'm taking, but the blood didn't occur anymore, and I decided it was a result of hard coughs during the night. In addition, I've been on the blood thinner for over 6 months, and I've had no problems with internal bleeding.

On my way to the Jordan River Parkway, I stopped at Daves and got some of the homeopathic remedy for dry coughs, so I'm ready for the next bout of coughing. I felt pretty tired during my run, actually a walk, and I wondered if I should abort my walk and return to my car. However, I decided to continue and made it to the turnaround point and then back to my car. I spent about 10 minutes at the turnaround point talking with a walker who is an older, retired man, although he is 7-8 years younger than me. He said he has seen me before on the path.

The temperature during my walk was in the mid 50s (F), and the sky was cloudy. We're supposed to have rain later this evening and maybe tomorrow.
at 4/27/2016 No comments:

Added a bit to my distance for 1.64 miles

There is a bench that is 0.82 miles from the starting line, and I went to that bench and back, for a total distance of 1.64 miles. I didn't feel like jogging, so I walked the total distance. The sky was overcast when I started, but no rain came, and it was sunny on the way back.

I saw a black colored bird in a tree by the river, and I looked to see if it had a red blotch on its wings (it didn't, so I assume the bird was not a red-winged blackbird). I also saw two feral or stray cats, one a black cat and one a Persian cat. They were on the path going down and coming back. The same cats (or two of the same colors) were loose last fall, and I'm wondering if they spent the winter outside. I said "meow, meow" and "here kitty kitty", but the cats ignored me, although they did look at me to see if I was making those sounds. On my way back, the black cat came near my feet, and I almost tripped over him. I did get to pet him for about a second before he ran into the bushes. He was a young cat, about 1 1/2 years old. The fact that he came near me and let me briefly pet him indicates he probably is not a feral cat. 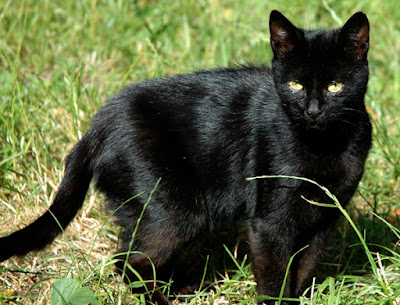 Email ThisBlogThis!Share to TwitterShare to FacebookShare to Pinterest
Labels: cats

Tomorrow is my week to teach 10 and 11 year old boys about the scriptures (there are two of us men doing the teaching, and we alternate weeks to teach), and then I'm going to my sister-in-laws house for Sunday dinner. Life is good! I keep an alarm system for my house activated. Burglars may get in the house, but once inside they will quickly wish they were some where else.
at 4/23/2016 No comments:

My daughter has been doing some walking, but she recently complained of pain in the front part of her lower leg. That area is known as the "shin" and pain there, known as shin splints, is a common problem with walkers and runners. Shin splints are an "over use" injury, meaning that the shin muscles aren't used to the amount of stress they are given. I told my daughter to do "furniture lifts" to help strengthen the shin muscles. I hope she will do those or similar stretches to strengthen her muscles. If she doesn't, the pain might get worse and lead to a more serious injury. Furniture lift stretches are described in my training blog at http://runninginjuryfree.org Walkers tend to not do stretches, because they believe their walking won't cause problems with their muscles. However, they are wrong in thinking this, because any activity causes stress, and stress leads to pain, and pain leads to injury. Stretch exercises reduce the tension and strengthen the muscles.
at 4/23/2016 No comments:

I saw several quail on the path, but there were no babies; the quail are apparently last years crop. I also heard them clicking in the nearby bushes. I was out in the early afternoon. The temperature was in the high 50s (F), but there was a stiff wind with gusts up to 20 mph which kept things cool.
at 4/23/2016 No comments:

I jogged for 40 seconds and walked for 60 seconds during most of the run. My knee started feeling a bit tight, so I went for 30 seconds of jogging. My knee thus felt fine for the rest of the run.
at 4/21/2016 No comments:

I didn't run last week, because I came down with a cold. This cold was, I believe, due to a lack of sleep. I got about 5-6 hours during the night, but I was careless about taking afternoon naps to bring me up to 7 hours. When I was younger, I would run through colds, but as I get older, I don't run through colds anymore. Being older, I don't have as much energy, and I'm letting my body focus on getting rid of the cold instead of moving me another mile or two. My cold is almost gone, and I feel fine, so I went running this morning. I included some jogging in my walking by jogging about 20 seconds and then walking for a while. When I finished, I was jogging 40 seconds and walking around 60 seconds.
at 4/19/2016 No comments:

I added to my run/walk and went 1.5 miles

The Police Academy uses the Jordan River Parkway as part of the physical conditioning of the cadets. The Academy officials painted a line across the Jordan River Parkway path at 0.75 miles from the Parkway sign in South Jordan. Each cadet had to run to that line and back to the beginning, for a distance of 1.5 miles, within a specified time to complete that part of the cadet training. To me, that line makes a good 0.75 mile marker. Today, I went to that line and back. I mostly walked, but I did a bit of jogging during that workout.

The following picture, taken from the web, shows police cadets training at a local track for their 1.5 mile certification run on the Jordan River Parkway. 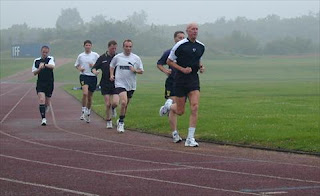 I had company over Friday night and much of Saturday, so I waited until late afternoon to go walking. It was sprinkling when I left home, but after I had gone about 1/3 mile, the rain stopped. One guy  I talked with, after I had gone about 0.4 miles, was grateful for the rain, even though it was light, because he had just finished fertilizing his lawn. Most of the day was sunny with clouds.
at 4/09/2016 No comments:

Did another 1.34 miles of walking

Today, as was yesterday, was a beautiful, sunny day with temperatures in the mid 50s (F). I walked 1.34 miles going on a new route around my neighborhood. After I finished my walk, I pruned a few rose bushes. I only have two or three bushes left. Then I need to prune another apple tree.
at 4/02/2016 No comments: